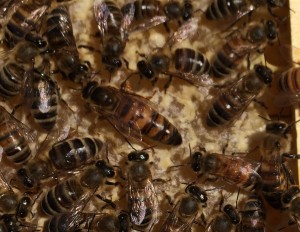 An Italian, Carniolan, or other bee colony can be re-queened using Russian Queens. The detailed process is explained in the research paper below.

It takes sometimes up to 10 days to introduce a new Russian queen bee into the colony.

David R. Tarpy, Department of Entomology, North Carolina State University and Jeffrey Lee, Commercial Beekeeper, Lee’s Bees, Mebane, NC has a detailed paper written on the differences between Russian and Italian honey bees. Steps to re-queen are on page 3. The paper outlines the steps to re-queening an Italian colony with a Russian queen. (Next Early Season Management)