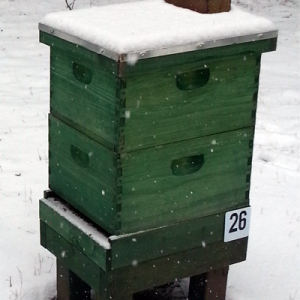 Honey bees keep the inside temperature of the winter cluster at about 95 degrees by exercising muscles and expending energy. A bee dies when its body temperature is 41 degrees. At 41 degrees the bee is not able to operate or flex its shivering muscles to stay warm.

The honey bee survives cold temperatures better than wind. It is wind that is most harmful. Windchill is the single most harmful factor resulting in bee deaths in cold climates. Locate a beehive  in a shelter or install a suitable wind block and the hives will have the best chance to survive.

Our location suffered the coldest winter in 70 years but unfortunately, our 2013/2014 losses were not covered by the Emergency Livestock Assistance Program, (ELAP) since our location experienced only 5 days that met the criteria. No losses were covered because most of the winter the cold vacillated between negative temperatures and just above 14 degrees.

Often times a honey bee, on its flight back from collecting nectar or pollen, will stop along the way. This is not because the bee is tired and needs a rest. This is the result of flying at 12-15 miles per hour with wind velocity cooling the bee. The bee stops to flex its flight muscles to warm up.

Bees are cold blooded and there is a limit to the amount of heat they can generate by metabolizing honey and exercising their wing muscles. Clearly, Russian honey bees can stay warm enough when active at outside temperatures in the low 40’s, but the warmth will dissipate fairly quickly at colder temperatures and as activity decreases.

I frequently see my Russian bees in flight and gathering pollen on 40 degree days whereas Italians and Carnolians require temperatures above 50 degrees to forage. This is why Russians are cold hardy.